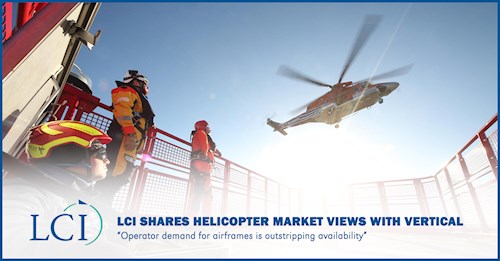 Post-pandemic, the helicopter market is recovering far more quickly than anyone could have predicted. Operator demand for airframes is outstripping availability, particularly within the leasing market.

According to Lease Corporation International (LCI), which has models on its books from Airbus, Bell, Leonardo and Sikorsky, there are signs this situation will persist.

“We are seeing real firmness in the market,” said Jaspal Jandu, the company’s CEO. “The industry was hit by a trio of issues starting around 2014/5, including an oil price shock, a tragic incident off the coast of Norway, and then a string of financial bankruptcies. These were complex issues which required time and effort to work through.

“The Covid pandemic then took root in early 2020; although an argument can be made that the industry had learnt a great deal in the preceding years. We now find ourselves in 2022 facing a unique confluence of supply, demand and sentiment-related factors pushing a tighter market in all directions. Interestingly, this is evident in both new, organic helicopter market growth, as well on the replacement side, where a delayed cycle is being rapidly addressed.”

It’s estimated that 50 percent of current global commercial helicopter fleets are more than 20 years old. Their replacement, which should have occurred between 2015-2020, did not for several reasons.

“During downturns, asset-heavy sectors such as helicopters, fixed-wing, shipping, and rail tend to delay new purchasing decisions, instead favouring the longer and harder use of existing equipment. OEMs also reduce supply as supply adjusts to demand. However, at some point these changes matter and require addressing,” Jandu explained.

“For example, there is a renewed ethos around safety and technology, so when an end-user demands the inclusion of, say, TCAS [traffic collision avoidance system] II or HEEL [helicopter emergency egress lighting] systems, we are collectively required to supply this, and we are finding that the older models don’t have these capabilities.”

As well as the technology issues, the Russian invasion of Ukraine will continue to impact the global helicopter market, he noted. Any operators using Russian equipment felt an immediate impact, such as those involved in supporting United Nations work, firefighting, and logistics operations — all of which have slowed or stopped completely. There’s now a need for Western types to backfill these operations.

Adding to this is the looming crisis across the oil and gas market as Russia cuts off supplies to many nations, with international and national energy companies having to make up the deficit. Across the Americas, Europe, Africa and Australasia, national energy security and supply are going to be critically important moving forward.

All these factors mean that we are moving back up the “demand curve,” Jandu said, and operators are now seeking both new and used helicopters in significant numbers.

“While the demand side is becoming clearer, the supply side is more complex as it involves the stored and leased fleet. In addition, OEM production tailed off during the pandemic and has been relatively inelastic in the upturn. Added to all these are genuine supply chain issues across the world,” he explained.

“We also have to remember that there is a large military dynamic in the helicopter market, which is not so apparent within, say, the commercial fixed-wing market. Many nations have significantly increased their defence spending due to the war in Ukraine. For an OEM, there are real-world decisions to be made with regards to the allocation of labor, resources, and production lines.”

Despite the complicated external factors, the helicopter market, from a lessor’s perspective, is steady.

For LCI, a significant increase in inquiries has also been matched by longer lead times. Operators looking to secure operations in 2024-25 and beyond are reaching out to lessors such as LCI now to arrange capacity. In many cases, this has resulted in multiple operators bidding for the same unit.

“We are seeing an increase in lease rates and a firmness in pricing, and it’s difficult to see how some of the aforementioned drivers resolve themselves quickly,” Jandu noted.

The positive outlook for helicopter leasing in the years ahead is not geographically limited, according to Nigel Leishman, executive vice president and global head of marketing: “The situation is certainly not limited to certain countries or regional markets; there is potential across the world. 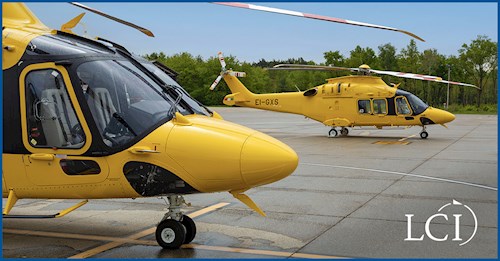 “If we look back to 2019, the market was already recovering from the reduced oil prices of 2014 and the drop in the offshore market. As we went into 2020 and Covid hit, there was uncertainty across the globe in all markets, but it quickly became clear that helicopters were mission critical,” he said.

As operators adapted their cockpits and cabins, many were able to return to daily operations in the offshore market, while emergency medical service (EMS), not unsurprisingly, saw an increase in activity. The offshore operators’ recovery was quick – in many cases, operations were back to normal levels by 2021. Now, 12 months later, the operational rates are higher than those of 2019.

Nonetheless, the past year has been challenging for operators, Leishman explained. “They are in the business of supplying a capacity to the end user, whether that be oil and gas or government. During Covid, we saw a situation where we thought many contracts would be coming up and then they were postponed for obvious reasons. There were quite a number of extensions to our leases which we thought we’d have been re-marketing with new contracts and operators. This was not a bad thing during Covid, but it has led to this current bow wave of demand as confidence returns, and tenders have come out that should have been raised two years ago. There’s a lot of them coming onto the market all at once.”

This demand has led to a shortage of high-quality helicopters that meet the requirements of operators. The impact of the geo-political situation, as nations worry about securing and growing their energy supply, has placed further demands on the helicopter leasing market.

“It’s an uncomfortable situation for me concerning my customer relationships. I am saying we may have a helicopter available, the current operator then wants to keep it, but the new client is happy to pay a premium as they need the helicopter as soon as possible so they can bid on further contracts,” said Leishman.

“This is happening all over the world, with high demand across Europe and Latin America, and particularly Brazil with its increasing offshore market. There’s a host of nations out there developing their energy markets that will need helicopter support. Nations are keen to grow their domestic supply.”

For the EMS market, some of the demand is created simply by the need to replace older twin-engine types likely postponed from pre-Covid times. In the United States, the single-engine EMS types are being replaced by newer technology on the next generation models.

Airbus has released its 20-year forecast that predicts demand for around 16,500 helicopters through to 2041. To reiterate the point about replacement cycles, Jandu points out that the ratio of replacement deliveries versus growth has flipped.

“It’s clear that if you pause a replacement cycle for five years, you then have to catch up at some point. You have the OEMs pushing new technology into the market and the end users demanding similar requirements on the helicopters that they will be using. These have become very much the table stakes and end users are telling operators not to bid unless certain minimum criteria are met.”

Such demands have set a benchmark across the industry that some operators are unable to meet. Helicopters have an enormously long and useful economic lives with around 50 percent of 37-year-old aircraft still in service, for example.

Within the industry, this is known as the survivor curve and many of these older types serve in secondary roles, such as utility and firefighting. LCI is seeing is an increase in demand for the replacement of newer younger machines within the market. 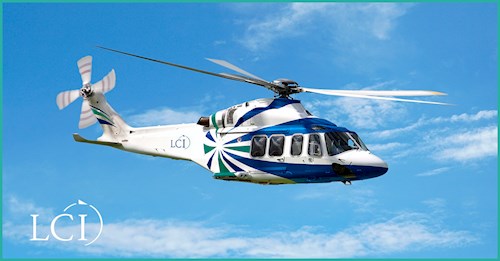 “It’s created a push-pull situation where an operator may have older helicopters that may well be ideal for a second life in the utility market, but they also need newer types for newer contracts. This presents us [LCI] with a challenge,” said Jandu.

“As a lessor you are therefore required to have different channels to acquire, finance and supply a diverse set of helicopters to the operators. If we solely go to the OEMs, for example, we have to work around slot availability and production schedules. We also must factor in PBH [power by hour] arrangements and spares support, both of which are not as cheap as they were two to three years ago.

“At a macro-level, we are all dealing with rising inflation and interest rates too. As a lessor, we work very, very hard at solving financial and capacity issues for operators and end-users – it’s our very job to facilitate such trades.”

The bow wave of the replacement cycle rippling across the helicopter industry shows no sign of ending anytime soon and that means lessors must continue to perform a very smart juggling act.