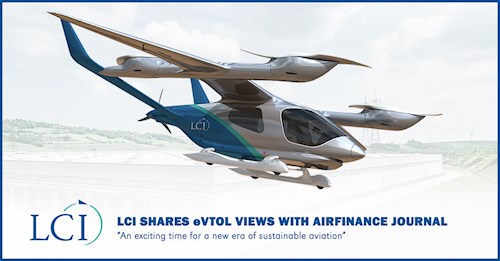 Fixed and rotor-wing industry player Lease Corporation International (LCI) aims to be an early adopter of new technologies in the market as evidenced by its recent commitment for 125 electric vertical take-off and landing (e-VTOL) aircraft.

“We don’t mind diversifying our investments. We are in growth mode and it is a good time to be risk-on,” chief executive officer (CEO) Jaspal Jandu tells Airfinance Journal in an interview.

“The basic order is interesting for us for a number of reasons: It is completely battery-powered and, therefore, support our vision on ESG and sustainability; an evolution of what LCI has done previously. The order is also an extension for us as we have had a history in the helicopter market for the past decade, and many lessons are applicable to such orders, for instance in the healthcare, cargo and logistic markets. It is a nice overlap with helicopter leasing.”

In late April the Libra Group's subsidiary signed an agreement with Beta Technologies to acquire up to 125 eVTOL aircraft. Under the terms of the deposit-backed agreement, the commercial aircraft and helicopter lessor will initially acquire 50 Beta Alia-250 aircraft with an option for another 75 eVTOL units.

The lessor said the new eVTOL aircraft will complement its existing fleet of modern helicopters and fixed-wing aircraft, and almost double the number of aircraft on its aviation platform to over 270 units. In addition, LCI and its parent company plan to share commercial, financial and supply-chain expertise with Beta through well-established industry networks.

LCI does not yet anticipate traditional passenger application but sees cargo and logistic applications as well as aeromedical (including emergency medical service and search and rescue) and reconnaissance missions for the aircraft.

“In those roles, LCI sees the eVTOL playing a complementary mission to its current rotor-wing portfolio. Some helicopter operators are going to be the first to use eVTOL technology, indeed there are many examples of drones already augmenting helicopter services,” Jandu states.

“Within LCI we have done a lot of research in this market, which broadly divides into two. The first one is in air taxi where the ‘Nirvana’ is cheap, fast and efficient mass transportation for everyone. However, within that environment, it is vital to consider the ‘speed limit’ of the network as a whole in addition to the vehicles themselves. The second covers non-passenger markets such as cargo, logistics, last- and middle-mile delivery, healthcare and non-combat military applications. Given the opportunities in these spaces such as warehouse-to-warehouse and hospital-to-hospital operations, we’ll probably see earlier and faster mass adoption there than the passenger markets.”

“Overall, however, it’s an exciting time for a new era of aviation that could generate trillions of dollars of value and investment.”

Nigel Leishman, executive vice-president and global head of marketing, says: “LCI is an early adopter of the Beta Alia programme. Their focus has been on strategic customers including the US government really looking at the logistic and transportation side of the business.”

“The air mobility-air taxi time will come but there are more hurdles to overcome in terms of certification infrastructure, air transport management, as opposed to the initial mission critical applications. From that point of view, when we started looking at the applications that is where it gets complementary to our helicopter business and light utility aircraft.”

He points out that some customers operate small turboprops on regional airports to hub, then use the road network to distribution centres to eventually reach the consumer. "Here you have a vehicle that has significantly lower operating costs that can fly warehouse to warehouse, by passing regional airports and hubs for distribution."

Leishman says LCI is not targeting that passenger urban to airport link and he believe that LCI's applications have a bigger social impact than passenger use.

Jandu adds: “For an operator, vertical lift with horizontal flying is attractive. You can imagine a whole range of operations also including offshore wind and energy industries. From an operating point of view, you can see a case where they have a battery-powered technology that gives a slightly shorter but more optimised flight envelope than a conventional aircraft or helicopter. In the end, they will all augment and complement each other.”

He says lessors have been looking at how they can engage in this market, possibly on a slightly different basis than existing business. "I feel we need to be innovative and possibly learn lessons from the shipping or automotive industries,” says Jandu.

“We don’t mind looking at other sectors, like we did a decade ago with helicopters. It is part of the LCI Libra Group DNA.”

To find out more about LCI’s and The Libra Group’s broader aviation strategy, please click here.