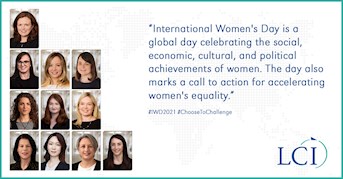 For more than a century, International Women’s Day has marked a day of celebration and advocacy for women’s rights and equality around the world. 2020 and 2021 saw significant progress: female leaders received global praise for their effective handling of the COVID-19 pandemic; Kamala Harris became the first female, black, and South Asian American Vice President of the United States; and not just one but two women were awarded the Nobel Prize in Chemistry.

Nevertheless, according to the World Economic Forum’s Global Gender Gap Report 2020, at the current rate of change, gender parity will not be attained for another 99.5 years. Our world and industry leaders will play a significant role in effecting permanent change, but each of us can make a difference, not least by taking the time to describe our own paths and share what we have learned.

Eleven exceptional women work at LCI, in every department, making up more than a third of our team. In this blog post, Jane Keith, Monica Butfoy and Chloe Lynch, talk about their roles, career paths and what advice they would give to women at the start of their careers.

What do you do at LCI?

Jane: I am Vice President, Transaction Management at LCI. I project manage a range of different transactions such as new deliveries and aircraft transitions between customers as well as managing the insurance requirements for LCI’s owned and managed portfolios.

Monica: As Technical Manager, I am responsible for the management and administration of the company’s wide-ranging lease management system which tracks all aircraft information, actual flight hours, rents, invoicing, reserve rates, maintenance payments and invoicing thereof.

Some of my key responsibilities include reviewing individual legal and maintenance support contracts; updating aircraft utilisation on a monthly basis and issuing maintenance reserves invoices to operators; and managing annual audits of aircraft and operators, which include a complete review of all aircraft technical records, AD/SB status, aircraft/engine logbooks and maintenance programmes, as well as a physical inspection of aircraft.

Chloe: I am an Assistant Accountant at LCI.

What aspect of your job do you most enjoy?

Jane: I enjoy the nature of project management work. No two transactions are ever the same and there are always different sets of legal, technical, logistical, insurance and fiscal circumstances to be considered and worked through. This involves coordination with many different stakeholders which can be challenging but highly rewarding when the job is complete. LCI has a broad customer base all over the world and I’m lucky enough to have worked with many great people from all across the globe and learned all about our customers’ diverse operations.

Monica: Not one day is the same. I enjoy juggling lots of different projects, dealing with lots of outstanding people in the aviation industry, constantly learning in an ever-changing industry, as well as having to be organised and one step ahead.

Chloe: Dealing with all facets of the company as well as my own team; Technical, Legal, Portfolio Management, Finance. There is always a new project ongoing and no two weeks are the same!

How did your career path lead you to this point?

Jane: I studied law in Trinity College Dublin. In 2010, I responded to an advertisement in a newspaper to work as a legal assistant in a small fixed wing aircraft leasing company in Dublin and loved it so much that I have worked in aircraft leasing ever since!

Monica: I had a keen interest in aviation from a young age. I moved from the hospitality industry at the age of 28 after spending many years watching the S61 coast guard aircraft fly overhead at Waterford Castle Golf Club where I managed the clubhouse. One day the owner flew in by helicopter, so I asked if I could go for a flight. Two months after that flight I started my Private Pilot’s Licence in helicopters. Unfortunately, I started during the recession, so once I had completed the private licence I knew I would not get the funding to proceed onto commercial. I changed focus and went to Institute of Technology Carlow to complete a 3-year Bachelor of Engineering in Aircraft Systems. I was still adamant I wanted to work with Helicopters so during my first year in Carlow I continuously contacted CHC Search and Rescue until they agreed to offer me work experience. I worked with them during summers and any holidays. Once I completed college, they offered me some contract work which turned into full time. After 4 years I moved to Lobo leasing and then on to LCI.

Chloe: I completed a Bachelor of Commerce degree in University College Cork and before joining LCI, I worked on the finance team in an insurance company for 3.5 years.

What advice would you give to women at the start of their careers who want to work in a role similar to yours?

Jane: I would say never be afraid to ask questions. It’s the only way you learn and when you are starting out and trying to solve a difficult issue - and things seems daunting - ask your colleagues and seek advice from those more experienced than you. There is almost always a solution to even the most seemingly problematic situation.

Monica: Always push forward and never give up on your dream, even if you have to take an alternative path along the way. Never allow anyone to put you off what you want to do in life. If someone says you can’t or won’t make it in that industry, make that your one of your many reasons to succeed. No matter how hard you might think a career is, with hard work and determination everyone can succeed. Never think you’re not good enough to do something!  Make your family and children proud!

Chloe: 1. Don’t be afraid to speak up. 2. Be willing to learn and have a questioning attitude. 3. Have confidence in yourself.

Visit the official International Women’s Day website to get involved and show your support.
www.internationalwomensday.com